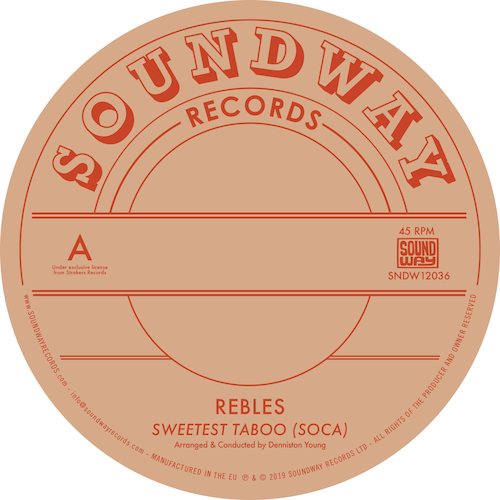 In the late 80s, as electronic music permeated popular culture, Rebles helped define the soca genre outside of the Caribbean. Also known as D’ Rebel’s Band and led by St Vincentian band-leader and trombonist Denniston Young, the group were the 1980s house band for probably the largest Caribbean label, Strakers Records, based in Brooklyn, New York. Strakers released hundreds of Calypso and Soca releases over a thirty year period from 1970 to 2000.

Finally available again after becoming a big record with a number of open-minded contemporary DJs who play Soca, Zouk, Highlife and Soukous alongside Disco and House, the 12" has been officially licensed and re-mastered ready to hit the summer party season head-on.

This 12" paves the way for a big compilation album of Soca crossover sounds coming later this year on Soundway.